The MRE logo was created by Cindy Fletcher-Holden in 1998

The Maritime Republic of Eastport (MRE) is a nonprofit organization that holds several charity events each year. Created in 1998, the MRE has distributed over $500,000 to local charities and organizations from funds raised at events including the annual .05K Bridge Run and Tug of War.

2020 is know as the "Year Without a Tug" because or the COVID-19 pandemic. The Bridge run was also cancelled that year.

A Virtual .05K Bridge Run took place on May 8, 2021. Participants submitted videos and $500 was donated to Feed Anne Arundel. 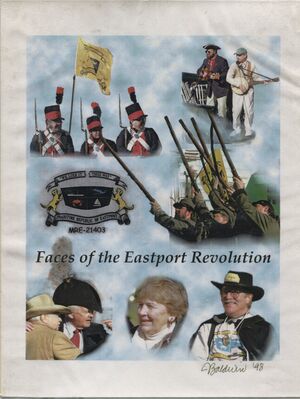 Faces of the Eastport Revolution

When the Maryland State Highway Administration announced plans to close the Spa Creek Bridge connecting Annapolis to the community of Eastport for three weeks of repairs, residents and business owners started talking about revolution.

On January 25, 1998, the day before the bridge closing, Eastport patriots declared "secession" from the City that had annexed the community in 1951. At 1 pm, Revolutionary War re-enactors fired volleys from muskets and cannon across Spa Creek. This was followed by the launch of the Eastport Aerial Reconnaissance Patrol (EARP), consisting of The Yellow Dog - a small yellow blimp controlled by "Generalissimo" Mike Raab. There was a "quick retreat" to Leon's Barbershop on Fourth Street where a Declaration of Independence was read and Leon Wolfe was sworn in a Prime Minister of the MRE by former Annapolis Mayor Al Hopkins.

Following the ceremonies and performance of the new Eastport National Anthem by the Eastport Chamberpot Orchestra and the Eastport Crabernacle Choir led by Them Eastport Oyster Boys, there was a benefit concert at the Chart House restaurant. 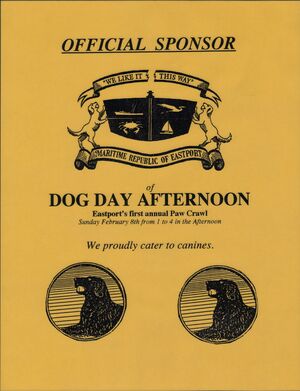 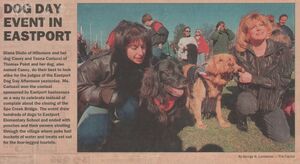 A few weeks later, on February 8, the first annual Dog Day Afternoon was held at Eastport Elementary. Canine contestants were given MRE bandanas and "celebrity" judges awarded prizes for clever dog tricks. The official mascot of the MRE was a marina retriever.

After the contest, the Paw Crawl took place. Eastport businesses welcomed pets and pet-owners into their establishments. 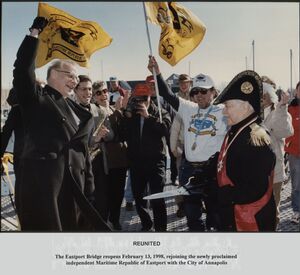 The Spa Creek Bridge reopened on Friday, February 13, 1998. A ribbon cutting by MRE Prime Minister Leon Wolfe was met with cheers from both sides. 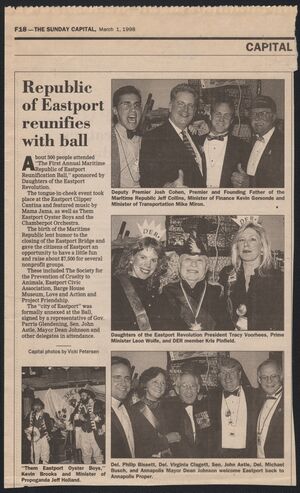 That evening, the Reunification Ball sponsored by the Daughters of the Eastport Revolution (DER) was held at The Clipper restaurant. The Unanimous Declaration of Independence was signed by MRE ministers and dignitaries during a musical celebration. 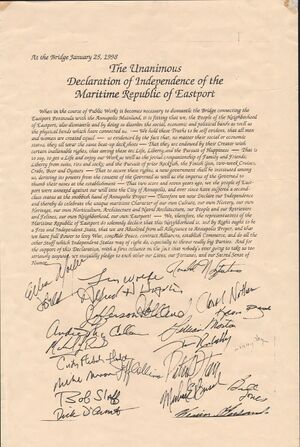 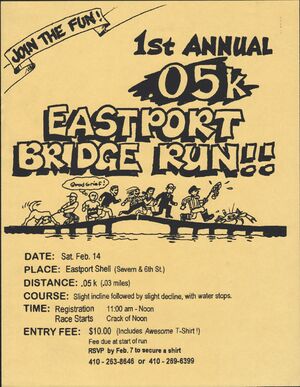 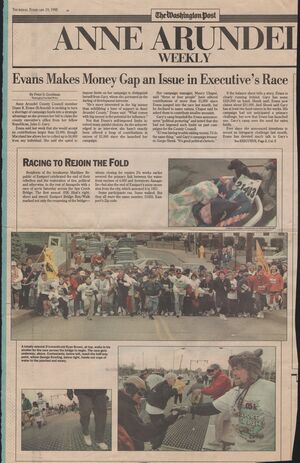 After a night of celebrating Reunification, the MRE managed to pull off another event that made headlines. On February 14, 1998, residents of the new republic "invaded" Annapolis with a .05K run over the repaired Eastport Bridge. Registrants were given t-shirts with artwork designed by Cindy Fletcher-Holden, Minister of Fine Arts & Aerobics. All runners wore the same number - 21403 (Eastport's zip code). Cups of water were handed out at the halfway point.

An awards ceremony followed that evening. Hamilton Chaney was declared the winner.

On May 28, 1998, the Republic took to the waters with 26 vessels. Spa Creek was declared "The Gulf of Eastport" and the flotilla paraded down "Ego Alley" as bewildered tourists looked on. 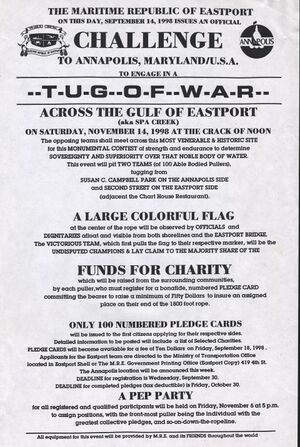 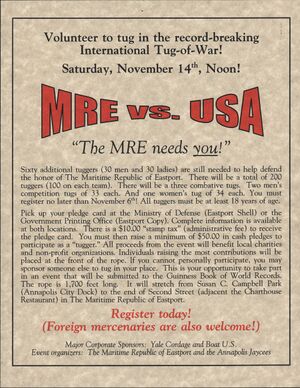 The 1st Tug of War contest between Eastport and Annapolis took place on November 14, 1998.

Retrieved from "https://pastport.org/w/index.php?title=The_Maritime_Republic_of_Eastport&oldid=941"
Cookies help us deliver our services. By using our services, you agree to our use of cookies.