Walter Lewis Satterlee Mills (1908 - 1994) was an educator in the Parole community of Annapolis, Maryland. Principal of Parole Elementary for 46 years, Walter S. Mills helped guide the education of generations of Parole families. Mills is also noted for his 1939 suit against the Anne Arundel County Board of Education that resulted in equal pay for black principals and teachers. Mills was represented by Thurgood Marshall, then a lawyer with the National Association for the Advancement of Colored People and later a Supreme Court justice.

Mills joined the Rev. John Chambers Sr. in founding the Community Health Center at Parole. The center has been renovated and expanded over its 80 years and now provides immunizations, reproductive health services and testing for HIV and tuberculosis. 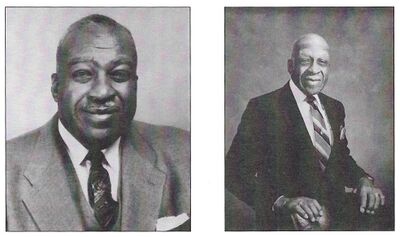 The son or William Thomas Gough Mills and Ellen M. Mills, Walter was born on August 2, 1908 in Maddox, St. Mary's County, Maryland. He was the youngest of seven children.

He received his elementary education in the public schools of St. Mary's County, Maryland; his high school and Normal School education at Bowie Normal School; his B.S. degree from Hampton Institute in 1939; and his M.A. degree in Administration and Supervision in Junior and Senior High School from New York University in 1949. He did further studies at Towson State University and Johns Hopkins University.[1]

During his lengthy career as a teacher and principal, Walter S. Mills earned the reputation as an outstanding educator and civil rights advocate in Maryland. He served for one year as teacher-principal of Fenwick School in St. Mary's County during 1929-1930. For two years following, 1930-1932, he served as principal of Bel Alton Elementary School in Charles County, Maryland. These years were followed by his forty-six years spent as principal of Parole Elementary School, which began in 1932 and ended with his retirement in 1978.[1]

Active in educations, civic, religious and social endeavors, he is remembered for the untiring services offered to humanity. He displayed an innate zest for high principles, an encompassing love for his fellowman, leadership traits, ability to get along with others and the ability to get things done to help others. he possessed and executed great leadership ability and could follow as well as lead during all causes for the good of humanity.

He endured many hardships but the hardships during his courageous activities to help humanity did not deter or dim his courage nor cause it to fail for he was a man of strong will, great determination, wit, courage, straight forwardness, fortitude and endurance. These strong attributes helped him to accomplish his aims, goals and great aspirations. He had the ability to think independently and after collecting his thoughts, he was very verbal and outspoken when he felt his idea or plan was worth pursuing.[1]

He was confirmed in Christ Episcopal Church, St. Mary's County, in 1914, and maintained his church affiliation there until 1932, at which time he moved to Annapolis and transferred his membership to St. Phillips Episcopal Church.

He was a staunch member of St. Phillips, a regular attendant, remained loyal to his obligations, served well and remained a faithful servant of God. He served as president of the Men's Club, as chairman of the Ways and Means Committee, member of the Board of Directors and as a member of the Committee on Missions of the Diocese of the Episcopal Church of Maryland. He always found the time and energy to be of assistance to St. Phillips in situations that became available or where he saw the need for action or activity.

He was involved in a wide spectrum of activities that encompassed many categories of leadership. While principal of Parole Elementary School, he took a gigantic step in working toward justice in employment practices in the educational profession where there was discrimination in the salary schedule and pay for Black and White teachers and principals. To correct such discrimination and cause equality, he was plaintiff during 1937-1939, in a lawsuit that was filed on his behalf in the United States District Court to require equalization of salaries of Blacks with that of Whites. This court case was a victory for him and marked a milestone in breaking the pay scale difference in Anne Arundel County and the State of Maryland.[1]

His leadership continued after this great milestone and included other categories, memberships, awards, and recognitions, some of which are as follows:

He retired as principal of Parole Elementary School in 1978, after serving as principal for forty-six years. During the these years, he saw the growth in population of the community and worked with the community and faculty in asking for the expansion of the school to the present new Parole School site. He worked, also, through plans for two additions to the new school of 1952, which came individually over a period of years thereafter. The school grew in size as did his years of service.

Retired from Parole Elementary School with a longevity, progressive, as well as a successful record which included standing up for equal rights more than once -- a record that is not surpassed by any other principal in the county to date.

The tennis court at parole School bears his name. The court was dedicated by the Mayor and Aldermen of the City of Annapolis.

After retirement, he served eight years as Board member of the Anne Arundel Community College.

One of his last accomplishments did not constitute a legal battle, as did the equalization salary suit, but it did involve money - an increase in finance for retired teachers. He chaired a committee that was successful in obtaining funds that pay 50 percent of the Blue Cross/Blue Shield for county retired teachers and principals.

His retirement as principal of Parole Elementary School was recognized from school, community, county and state with recognitions as follows:

He maintained great love for his family home. He was a loving, kind, caring, responsible husband to his wife of forty-five years, Irene Stryckning Mills; father to his daughter, Valerie Mills-Cooper; and grandfather to his granddaughter, Irene R. Cooper.[1]

Retrieved from "https://pastport.org/w/index.php?title=Walter_S._Mills&oldid=936"
Cookies help us deliver our services. By using our services, you agree to our use of cookies.